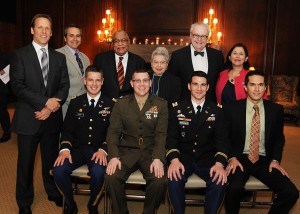 The John Marshall Law School Board of Trustees selected eight individuals as the 2013 Spirit Award on April 5, 2013, in recognition of the outstanding efforts they took that led to specific benefits for John Marshall students.

Brothers Joseph (JD ’91), Andrew (JD ’95), and Matthew (JD ’05), partners at The Leonard Law Group, established the Dr. Eugene T. Leonard III Scholarship Fund to give back to John Marshall, and honor their late father who encouraged and supported them.

In addition to the scholarship, the brothers have made other gifts to the school, including one of the first gifts in support of the Justice Arthur J. Goldberg Memorial Courtroom.

Capt. Nicholas Henry (JD ’08), Capt. Michael Barnicle (JD ’08) and Capt. Ryan Coward (JD ’06) were John Marshall classmates who led the drive to establish a clinic to help veterans navigate the often cumbersome VA claims process. In 2006, they won support from the faculty, administration and Board of Trustees for establishment of the Veterans Legal Support Center & Clinic (VLSC), a program that today provides clinical training for law students while serving the needs of veterans.

Harriet Hausman is a “behind the scenes” donor whose generosity began in 1988 with the establishment of the Martin C. Hausman Scholarship Fund in memory of her late husband, Martin (JD ’37), who never forgot the generosity of Dean Edward T. Lee, who paid Hausman’s tuition of $15 a month so that he could attend night school while still working part time. When Mr. Hausman died in 1988, Harriet established the need-based scholarship in his name, giving preference to those students who had been involved with the Better Boys Foundation.

Larry Rogers Sr., of Power Rogers & Smith, P.C., wanted to honor his late friend, Don Hubert, an adjunct professor at John Marshall who was a firm believer in education and diversity within the legal profession. Larry Rogers, now a trustee at John Marshall, worked to establish the Hubert Scholarship.

Rogers also has been very supportive of various outreach programs, and was a leading donor in support of the campaign to raise funds for the VLSC.