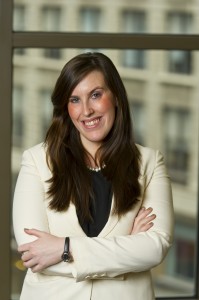 Rachel Ryan, a third-year student at The John Marshall Law School, has been named accepted into the Presidential Management Fellows Program, a prestigious two-year paid government fellowship sponsored by the Office of Personnel Management.

Ryan will begin work after graduating in May 2012. She was selected from among 10,000 applicants. She hopes to work for the United States Department of Veterans Affairs (VA).

During summer 2011, Ryan worked for the VA Office of Tribal Government Relations in Washington, DC. She spent two months in Washington, and also spent time in Arizona at Navajo Nation and Hopi Nation learning about their court systems, their hospital needs and their tribal government.

It was from others at the VA Office that Ryan learned about the fellows program. After her great experience over the summer, Ryan decided to try for an appointment, but she believed it was a long shot.

When she returned to John Marshall, the staff at the Career Services Office helped her with the application.  She got an interview in November 2011 and was notified Jan. 23 that she had been selected.

Ryan has been a student working at John Marshall’s Veterans Legal Support Center & Clinic (VLSC) since her first year of law school.  She got her summer VA job through the VLSC.

Ryan continues to do part-time work for the VA and looks forward to working for the agency’s Office of Tribal Government Relations in the future. She also has a personal desire to help American Indian because she is part Cherokee.

“The American Indian minority has the highest percentage of military veterans and yet they tend to be missed too often” for veterans benefits and services, Ryan said. “American Indians are an amazing and powerful people, and their tribes have proven to be strong and resilient.”

A graduate of Purdue University, Ryan received a bachelor’s degree in legal sociology before enrolling at The John Marshall Law School.