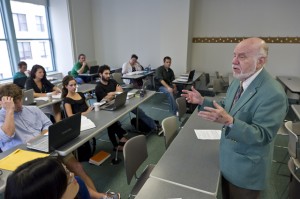 Bob Nye hit the ground running as a professor at The John Marshall Law School in 1962. Enlisted by Dean Noble W. Lee, Nye was given the Secured Transactions course to teach and a few days notice to prepare for his students. But, learning the ins and outs of a specialized field of law in a short amount of time is nothing new for Nye.

Lee stated in 1937 that John Marshall should be “training future lawyers by men of ripened experience and practice.” Under Lee’s pronouncement, Nye was part of a faculty that practiced full time on top of teaching.

“[Balancing my time] was not easy; there was a lot of work,” Nye reflects, on his dual role as practicing lawyer and faculty member at John Marshall. Nye taught as many as 20 class contact hours per week in the ’60s—a heavy load compared to the current maximum six hours per week now set by the American Bar Association.

John Marshall has come a long way in its 100-plus years—growing from its first class of three students in 1899 to more than 350 entering students this fall. Since 1962, Nye has watched the law school cover a lot of ground. He no longer teaches primarily at night. And, though a number of the law school’s current professors have also been practitioners, he is no longer a full-time practicing lawyer.

In the past 50 years, John Marshall has expanded its programs and physical space to accommodate its growing enrollment and to optimize a cutting-edge education in an ever-developing field. John Marshall has been building its one-of-a-kind specialized programs for more than 65 years, and Nye has been shepherding the law school’s Distance Education Program since its inception in 2002.

Appointed to the now-defunct Chicago Consortium of Higher Education as the distance learning representative for The John Marshall Law School, he started John Marshall’s program with videoconferencing equipment and linked John Marshall with Southern Illinois University (SIU) School of Law. The pairing gave Professor Doris Long an SIU audience for her Unfair Competition class and an SIU professor taught Education Law to students in Chicago. The program quickly evolved in less than a decade. Distance education today consists of more than 20 eCourses offered by the Centers for Excellence, including an option for a full LLM degree in Employee Benefits.

Societal shifts have brought in a student body more diverse than the predominately white male demographic of the early 1960s. Nye said the students have changed not in their respect toward professors and course material, but in dress code. Nye had set a dress code that students must wear a suit and tie—proper courtroom attire—to class, a rule that has since died out over the years.

“Then, there were no complaints about dressing up for class. Now, it’s unreasonable for me to enforce that rule.” Nye believes this is because students, finishing college and going straight to grad school, no longer see law school as a professional institution but as an extension of their undergraduate education.

“What sticks out is what they have become, not what they were when they came to John Marshall,” Nye remarked.

It should be no surprise that he’s played leadership roles outside of John Marshall, both real and staged.

A long-time resident of Oak Park, Ill., Nye takes on pro bono cases for Downtown Oak Park, the business association for merchants in the central business district, and serves as counsel to its board of directors. Since the ’90s he has also been a selected guest faculty member at seminars for Illinois judges on civil law topics.

At the Chicago Bar Association, Nye was part of their Christmas Spirits holiday program from the 1960s and through 2008. He shared the stage with both Dean Lee who appeared in the men’s dancing chorus, and Dean John Corkery who played well-known individuals in the Chicago legal community. Nye was part of the chorus, but he also was known for playing roles as Mayor Richard J. Daley and Illinois Governor James “Big Jim” Thompson.

One script line Nye especially recalls as Thompson , known for his stature: “I look tall because most of my assistants are shorter.”

He is a committee member for the Jeff Awards, a group of 50 local professionals committed to celebrating the vitality of Chicago area theatre by recognizing them at two awards ceremonies every year. Nye sees more than 150 stage plays in a year for Jeff Award consideration.

“Theater and music has been a part of family tradition,” Nye explained. However, his lawyer-musician father seldom enlisted his son on bass fiddle for his band during the late 1940s and early 1950s when performing at weddings and bar mitzvahs.

Despite Nye’s skill as a quick learner, he admits, “I wasn’t any good at bass fiddle.”