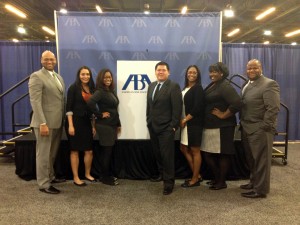 The John Marshall Law School had six students participate in the Judicial Clerkship Program as part of the American Bar Association (ABA) Mid-Year Meeting in Dallas in early Feb. 6 through 12.

The program is conducted jointly with the Council for Racial and Ethnic Diversity in the Educational Pipeline and the ABA Judicial Division with the generous support of LexisNexis®.

The program is open to 100 minority law students from around the country who meet over three days in various sessions with judges and former law clerks. The group participates in panel discussions, a research and writing exercise and informal social events. These activities are designed to introduce and reinforce to the students the reasons and values of pursuing a judicial clerkship. Numerous students have obtained clerkships and internships as a result of their participation.