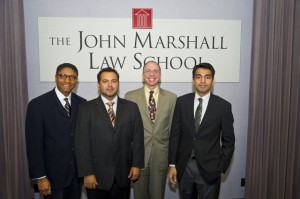 John Marshall Law School Professor Shahram Dana (second from left) was the moderator for a panel at the Bahá’í Conference on Law that featured (from left) Dr. Michael Penn of Franklin & Marshall College; University of Nebraska College of Law Professor Brian Lepard; and Ali Abid (JD’ 11), a Leighton Fellow for the Study of Prisoners’ Rights at The John Marshall Law School. Their topic was “New Perspectives on International Human Rights.”

“Applying Bahá’í Principles to Contemporary Legal Issues and the Practice of Law,” was the theme for the Seventh North American Bahá’í Conference on Law Oct. 14 through 16, 2011, hosted by The John Marshall Law School.

Outstanding speakers from throughout the country offered their insights.

The keynote address was delivered by Brent Poirier a New Hampshire-based immigration lawyer focused on academics, and an occasional faculty member of the online Bahá’í educational agency, the Wilmette Institute. His topic was “Bahá’ís Promoting Justice.”

The panel on “New Perspectives on International Human Rights” included University of Nebraska College of Law Professor Brian Lepard discussing “A Bahá’í  Contribution to Discourse on International Human Rights Law;” Dr. Michael Penn, department chair and professor of Psychology at Franklin & Marshall College on “The Protection and Development of the Human Spirit: An Expanded Focus for Human Rights Discourse;” and Ali Abid, a Leighton Fellow for the Study of Prisoners’ Rights at The John Marshall Law School, discussing “Blasphemy of Religion: An Examination of UN Defamation Resolutions.”

The law, gender equality and family session featured Camille Khodadad, a partner at Hall Prangle and Schoonveld LLC, on “The Effect of the Bahá’í Revelation on the Advancing Role of Women” and Shadi Katirai, a health lawyer, who addressed “Social and Spiritual Implications of Commercial Surrogacy.”

For a panel on public discourse, the speakers were Felicia Taghizadeh of New Mexico on “From the Tragedy of the Commons into a Common Prosperity: The Transforming Power of Bahá’u’llah’s Principles;” William Barrett on “Applying Bahá’í Principles to Anti-Corruption and Anti-Bribery Discourse,” and Moussa Traoré on “The Law of the Land and the State of the Soul: Analyzing Theoretical Frameworks of Bahá’í & Islamic Law Within and Beyond the Nation-State.”