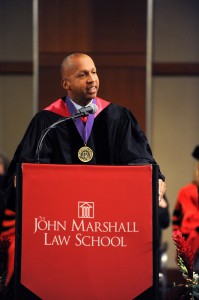 Stevenson is the founder and executive director of the Equal Justice Initiative (EJI) in Montgomery, Ala., and a professor at the New York University School of Law. President Obama named Stevenson to the White House’s Task Force on 21st Century Policing, a group aimed at assessing and strengthening best community policing practices in the wake of protests over police killings across the country. John Marshall conferred upon Stevenson an honorary degree at the Jan. 18 graduation.

“We were so excited to have Bryan Stevenson share his 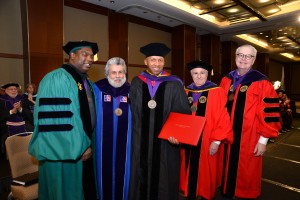 insight and vast experience in civil rights with our students as they are about to start their legal careers,” John Marshall Dean John E. Corkery said. “Bryan’s impassioned work fighting for justice and the rights of the underrepresented is a model of the good work lawyers can do for others, and one to which our students can aspire.”

A graduate of Harvard Law School and the John F. Kennedy School of Government at Harvard, Stevenson has devoted his life to helping disadvantaged people in the Deep South. He has received the American Bar Association’s Wisdom Award for public service, the ACLU’s National Medal of Liberty and the MacArthur Foundation “Genius” Award. He has received 15 honorary degrees including from Yale University and Georgetown University. He is the author of the New York Times bestseller, Just Mercy, released in October 2014.