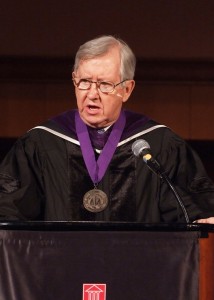 Graduation day is a “successful ending of a considerable journey” and the first step on a new one, Circuit Court of Cook County Judge Paul P. Biebel told the students at the June 3, 2012, commencement ceremonies for The John Marshall Law School.

In his commencement address, the judge reminded graduates that “life is like a feather. The wind picks it up and it lands someplace else.” For him, it’s meant “seven landings in green and lush locations” including positions with the Cook County State’s Attorney’s Office, the Illinois Attorney General’s Office, two law firms and positions within the judiciary.

Biebel reminded students that they are joining a very prestigious profession and will be welcomed by the more than 89,000 lawyers in the state. But to find a position as a lawyer they will need more than luck; they will need to be persistent and persuasive, and especially be good at the law.

“John Marshall is a special school. Alumni know each other and they know the kind of education you’ve received. Don’t ignore them. Go out and meet people and find those who can mentor you,” he urged the graduates.

High profile attorneys, such as former Gov. Rod Blagojevich, have left a stain on the profession. Biebel said even in Abraham Lincoln’s time, attorneys were considered dishonest, but Lincoln recognized his chosen field as an honest calling.

“Attorneys have a weighty responsibility to represent someone other than themselves,” and this requires a moral compass in both one’s personal and professional life. “Resolve to be honest in all events. As an attorney, it is your good name and standing that are your most important assets,” he stressed.

As the presiding judge of the Criminal Division of the Circuit Court of Cook County, Biebel works with more than 400 judges in the largest criminal court in the United States. The treatment to others he sees in the courtroom has sometimes been shocking to him.

“In my experience, I find many new lawyers are uncivil. And among other lawyers and the judges they like to throw around legal terms. They think it makes them smart. Not so.

“Lawyers tend to get big heads, but big heads are nothing more than a balloon, and I’ve got a long needle,” Biebel jokingly told the audience.

“In daily life being nice, being kind and being well-liked” are essential qualities, and traits that he finds in good attorneys.