Smith spent nearly 50 years in the classroom at John Marshall before his official retirement in 2014. Before joining the John Marshall faculty, he taught speech at Loyola University Chicago, served as a U.S. Naval aviator, clerked for Justice John V. McCormick of the Illinois Appellate Court, and was staff counsel for Santa Fe Railway. In 1970, he was elected to the Illinois Constitutional Convention, where he served on the Executive Article Committee and the Official Explanation Committee. In 1972, the Governor of Illinois appointed him to the Governor’s Transitional Task Force and later to the Illinois Board of Ethics.

In 1991, Smith founded the National Criminal Justice Trial Advocacy Competition, co-sponsored by John Marshall and the ABA Criminal Justice Section. The ABA recognized the Competition as the Best ABA Program for 1998. Over the past 28 years, 560 teams—including 2,240 students—have competed in the award-winning competition, including teams from all of the top-ranked advocacy programs in the country. Kelly Navarro, Associate Director for John Marshall’s Center for Advocacy & Dispute Resolution, worked closely with Smith each year to administer the competition.

“Ron Smith had a talent for bringing together interesting and spirited people, and because of his love of trial advocacy, he started the National Criminal Justice Trial Competition,” Navarro said. “He loved providing a backdrop for students and coaches to tell stories and to experiment with evidence and arguments.”

Smith joined the John Marshall faculty in 1968. He taught Criminal Law, Criminal Procedure, and Federal Criminal Law. He was also a Fellow of the American Bar Foundation and served periodically as an Assistant State’s Attorney for Cook County from 1975–1980.

He attended Loyola University Chicago for his bachelor and J.D. degrees. 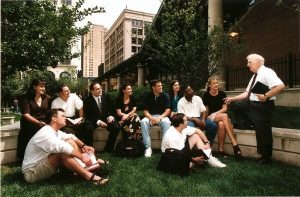