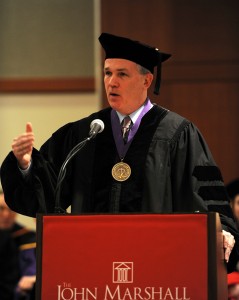 “If there’s a cause or issue out there that appeals to you, find the time within your own constraints to give back,” Fitzgerald said. “You will get so much more out of it than what you give. The skills and education you have could make a great difference in society.”

Fitzgerald told the graduates that it’s not an easy time to be a lawyer and offered advice to help them succeed that was gleaned from his 24-year career in government and his experience working in the private sector.

Fitzgerald said many who have been practicing for years will tell graduates how easy they have it now. By comparison, Fitzgerald said he will tell them that being a lawyer today is not any easier than it was when he was first licensed to practice law 28 years ago. “The world is changing, our economy is changing, there are lots of pressures on folks,” Fitzgerald noted. “It’s not an easy time to be a lawyer and I recognize that.”

Fitzgerald encouraged the  graduates sitting before him to believe in themselves: “Clients are going to look to you for advice on some important decisions. If you don’t have confidence, you won’t fulfill your potential.”

As a lawyer, your reputation is paramount and dependent on truthfulness, he said.

“Don’t walk away from your word,” he told them. “It’s important to the success of your career.”

Fitzgerald acknowledged that  most lawyers do a great job managing other people’s problems, but don’t focus enough on themselves.

“Every year I was working in government, I would ask myself, ‘Why am I doing this? Why am I here? Is this something I want to be doing? Is there something I should be doing differently?’” he said. His advice: “Don’t take a job you don’t like so much if it means passing up something else you’d rather do, because of something like a difference in income.”

Fitzgerald also told graduates of the need for balancing work with their personal lives.

“When you enter the law, you enter a profession where by and large the job consumes you,” Fitzgerald said. “Part of actively managing your career is to think of how it works for you and your family.”