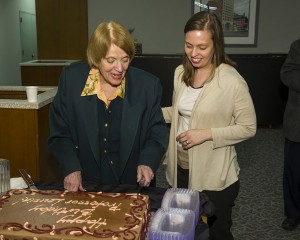 Professor Ann Lousin prepares to cut her 70 th birthday cake with assistance from her niece, Elizabeth Mirza Al-Dajani (JD ’08). At the party on Feb. 21, Lousin was named to The Edward T. and Noble W. Lee Chair in Constitutional Law.

During that year Lousin will spend most of her time researching, writing and speaking on constitutional subjects, especially the Illinois Constitution.

Lousin is the third professor to receive the honor. Linda S. Greene of the University of Wisconsin was the first honoree. Juan Perea, a professor at Loyola University School of Law, is the current honoree.

Edward T. Lee and his son, Noble W. Lee, collectively served The John Marshall Law School for 90 years, leading the school as deans for 65 of those years. The Lee Chair in Constitutional Law was established in 2010 to honor their contributions to the law school and the legal profession, and their shared interest in constitutional law.

Lousin has made the study of the Illinois Constitution and Illinois government her life’s work.  A native Chicagoan, she studied at Grinnell College, The University of Heidelberg in Germany and The University of Chicago Law School. She was a research assistant at The Sixth Illinois Constitutional Convention in 1970 and served the Illinois House of Representatives from 1971 to 1975 as staff assistant to the speaker, and as parliamentarian of the House from 1973 to 1975.

Since joining the faculty of the law school in 1975, Lousin has served bar associations, civic organizations and charitable societies in addition to her law school duties. She also has held several governmental positions.  Although the professor teaches primarily in the field of commercial law, especially Sales Transactions, she also has taught Legislation and Illinois Constitutional Law.

She also writes a column on “Law and Public Issues” for the Chicago Daily Law Bulletin. She has received several awards, including the Best Professor Award presented by John Marshall students; the John Marshall Alumni Association’s President’s Award; the distinguished alumna award from Grinnell College; and the Lifetime Achievement Award from The Armenian Bar Association.

Over the years Lousin has developed a reputation as the foremost expert on the 1970 Illinois Constitution. Her treatise, The Illinois State Constitution published in 2009, is part of the reference guide series on state constitutions published by Oxford University Press. It traces the history of the Illinois constitutions and analyzes each section of the current constitution separately.