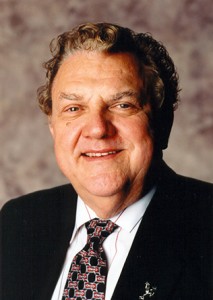 Professor Emeritus George Trubow, an early champion for privacy rights who in 1983 founded the Center for Information Technology and Privacy Law at The John Marshall Law School, died Monday, Jan. 7, 2013.

He was 79. He died after a long illness.

“George Trubow had a major impact at the law school during the 1980s and ’90s. His early vision of a world dominated by computers helped our students prepare to succeed in the brave new world of technology they would face in the practice of law,” said Dean John E. Corkery.

“George was a faculty member for 25 years. In that time he took on many leadership and teaching roles in the areas of privacy and technology. Perhaps his most important legacy is the Journal of Computer and Information Law, which he began and which continues to thrive today, with even more importance than when it began.

“As computers began to have a major impact on the world of law, Professor Trubow developed a curriculum, founded a Center, and created a legal journal to help our students deal with the challenges those developments brought about,” Corkery added. “He also was one of the first to predict the impact that technology would have on privacy and on law.”

A graduate of the University of Michigan Law School, Trubow had the foresight to recognize the technology revolution, and began developing courses at John Marshall that focused on computers and their impact on law, business and privacy. The Center for Information Technology and Privacy Law was the first of its kind in the United States.

He was a long time member of the law school’s faculty. He practiced in Kansas and Missouri before joining the faculty in 1961 and continued as a professor until 1965. In 1965 he was awarded the prestigious Congressional Fellowship by the American Political Science Association, and that year he accepted an appointment with the federal government.

Trubow’s experiences between 1965 and 1975—long before the general population thought about computers—included examining major issues as deputy counsel for the U.S. Senate Judiciary Subcommittee on Improvements in Judicial Machinery; he served on the U.S. Attorney General’s Advisory Council on Law Enforcement Education and director of the Office of Inspection and Review for the Law Enforcement Assistance Administration at the U.S. Department of Justice; and general counsel for the Domestic Council Committee on the Right of Privacy, which was a cabinet-level committee chaired by then Vice President Gerald Ford. Working to guard personal information, such as social security numbers, bank accounts and today’s Internet usage.

He was a pioneer in advocating the individuals’ right to privacy. Trubow also undertook a study on personal privacy and information technology for the American Bar Association (ABA), and co-authored several books on privacy.

When he returned to John Marshall, he immediately started organizing courses dealing with computers and privacy. After several years, then Dean Leonard Schrager gave Trubow the task of organizing the Center.

“We all owe a debt of gratitude to Professor Emeritus George Trubow. This Center has had a remarkable 30 years on the cutting edge of law,” said Professor Leslie Ann Reis, a Trubow protégé who is the current director of the Center. “Professor Trubow’s pragmatic concerns for one’s privacy and security have come to fruition.”

Under Trubow’s leadership, the Center’s national reputation grew. In 1998, the John Marshall faculty approved an LLM degree in Information Technology and Privacy Law. The Center also offers an MS degree for persons with computer backgrounds.

Trubow remained active with the ABA and was the Reporter in drafting the Uniform State Criminal Records Act. He was a founder and long serving member of the SEARCH group, the national consortium for criminal justice information technology. He worked as an advisor to the National Research Council in Washington and a consultant on privacy to the U.S. Treasury Department Financial Fraud Institute, as well as being a member of the Federal Computer Systems Security and Privacy Advisory Board.

He is survived by his wife, Sue, and two sons, Geoff and Jon, and daughter-in-law, Dawn Trubow.

Interment will be private. A memorial service is being planned at the law school. Memorials in Professor Trubow’s honor can be made to the Center for Information Technology and Privacy Law at The John Marshall Law School.