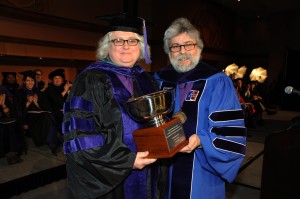 She was recognized with the Leadership and Dedicated Service Award for her nearly 30 years of working with the Moot Court Program. She has directed the program since 1996 and has dedicated many hours to helping build a nationally recognized Moot Court Program that is one of the largest in the country. Each year, John Marshall students compete in more than 25 competitions. She herself coaches as many as six teams each year. She has also been invited to speak on the topic of building moot court programs at regional and national legal writing conferences.

Hamann’s work has been invaluable to hundreds of students. She coached the first John Marshall team to win a national competition. Since that first success, teams under her direction have won numerous national, state and regional honors. In 2010, one of her teams won the Moot Court National Championship.

Past Moot Court students have gone on to become successful attorneys, professors and judges. Hamann has been instrumental in bringing back some of these graduates to coach moot court teams and teach as adjuncts in the Lawyering Skills Program. She also mentors and advises students on the Moot Court Executive Board.

In the 1980s, Hamann administered and helped expand the John Marshall Moot Court Competition in Information Technology and Privacy Law.  In 2004, she took on responsibility for the Fred F. Herzog Moot Court Competition when it became a required course for all third semester students. More recently, she and Professor Joanne Hodge created an advanced advocacy seminar for team members.

Hamann joined the faculty in 1984. She teaches Antitrust, Administrative Law, Corporations, Estates and Trusts, and Lawyering Skills. Outside the law school, Hamann has advised and served on the boards of a number of religious, health care and educational institutions. 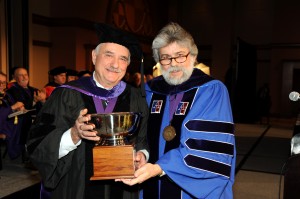 Professor Caruso’s first involvement with The John Marshall Law School was in 1986 when, as an adjunct professor, he started teaching the Fair Housing/Fair Lending course. In 1987 he helped the law school establish an externship at the Leadership Council for Metropolitan Open Communities in Chicago.

When he came to the law school in 1994 joining the full-time faculty as clinical professor, he was named director of the law school’s newly organized Fair Housing Legal Clinic as it began its pro bono mission. He also helped establish and became co-executive director of the Fair Housing Legal Support Center, which educates the public on fair housing law and provides legal assistance to those seeking to eliminate discriminatory housing practices.

During his tenure at the clinic, Professor Caruso led hundreds of students in pro bono work before various courts and government agencies, winning numerous decisions that have helped implement fair housing laws. 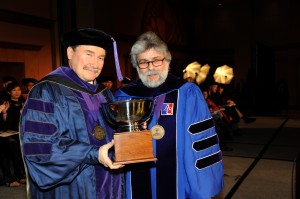 The Leadership and Dedicated Service Award was presented by Professor William B.T. Mock (left) at the Jan. 15, 2012, commencement by Associate Dean Ralph Ruebner.

Professor William Mock was presented the Leadership and Dedicated Service Award for his many contributions since joining the faculty in 1983. He served as associate dean for Academic Affairs and was instrumental in the law school’s international partnerships.

He founded and directed for nine years the Center for International Law. He established two LLM programs–one in Global Legal Studies for foreign lawyers and the other in International Business and Trade Law. He developed the law school’s relationships with law schools in Italy and Lithuania, and participated in the formation of John Marshall’s Chinese programs.

Since 1998, Mock has been a scholar-in-residence at the law faculty of the University of Cagliari in Sardinia, Italy.  He has lectured or done academic development work around the globe, and has worked on behalf of international organizations, including the Open Society Institute and the United States Agency for International Development.

Mock has coached John Marshall’s international law moot court teams, particularly those participating in the Jessup International Moot Court Competition. He served as the faculty advisor to the International Law Society for almost 20 years, and was a co-founder of the law school’s Journal of Computer and Information Law.

Mock has served in state and national leadership positions within the legal profession and is a frequent speaker at professional conferences. He is a member of the Administration Committee of the ABA Section of International Law where he is the publication officer, responsible for a program of books and law journals serving the Section’s 23,000 members.

The past two years, he served as co-editor-in-chief of the ABA’s International Law Year-in-Review journal.  In 2010-2011, he was the chair of the International and Immigration Law Section of the Illinois State Bar Association.  His book, Human Rights in Europe: Commentary on the Charter of Fundamental Rights of the European Union was published in 2010. 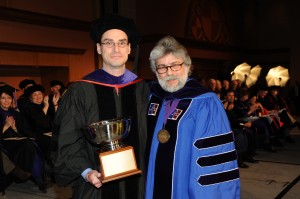 Professor Schwinn, an outstanding legal scholar and prolific writer in the areas of constitutional law and human rights was presented the Scholarly Achievement Award.  His scholarship focuses on structural issues—the separation of powers and federalism—as they relate to individual rights.  His articles have appeared in both U.S. and international law journals; his most recent pieces will appear this spring in the Political Science Quarterly and the University of Connecticut Law Review.

Professor Schwinn taught at the University of Maryland School of Law before joining the John Marshall faculty in 2007. He loves to share his passion for constitutional law with his students.  He helped develop a seminar on comparative constitutional law in South Africa, now in its third year. He also developed a constitution-in-the-classroom program, where John Marshall students teach constitutional law lessons to classes in the Chicago Public Schools.  Last spring, John Marshall’s Latino Law Student Association presented him with a special honor recognizing his commitment to teaching.