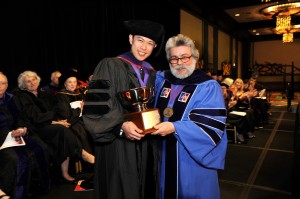 Two outstanding faculty members were given special recognition at the May 2014 commencement ceremony for their efforts in academia and with John Marshall students.

Lim’s book, Patent Misuse and Antitrust: Empirical, Doctrinal and Policy Perspectives, was recently published by Edward Elgar Publishing. Lawyers for both sides in Kimble v. Marvel Enterprises, a case under consideration by the United States Supreme Court have cited the book. Lim is working on the patent and antitrust sections of Intellectual Property: Law, Policy and New Perspectives, a casebook by West Publishing. 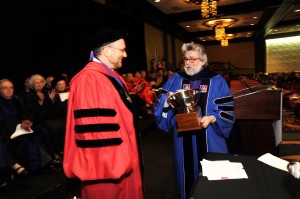 In 2013 Lim was appointed a peer reviewer for the Max Planck Institute’s International Review of IP and Competition Law (IIC), one of about 30 reviewers worldwide, in recognition of his “knowledge and skill in the field.”  He is also a peer reviewer for The Yale Law Journal.

Lim was a co-consultant on an amicus brief filed by the American Antitrust Institute with the United States Supreme Court regarding Bowman v. Monsanto Co., a 2013 case that involved patented genetic traits, raising issues involving post-sale rights of patent owners.

He has contributed to practitioner-focused publications for the American Bar Association and delivers presentations to judges, government officials and attorneys both in the United States and abroad.

Sorkin has spent more than two decades enriching the curriculum and programs for John Marshall Students. He came to John Marshall as a Lawyering Skills faculty member, but he is best known for helping John Marshall embrace changes in technology and is credited with launching the law school’s first website 20 years ago. He began teaching Cyberspace Law, and also created the country’s first law school course on spam email. He teaches an online course in Consumer Law and is developing a Cyberspace Law online course for fall 2014. 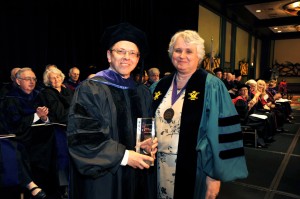 He chaired the 2012 Braun Lecture, “The Development of Privacy Law from Brandeis to Today” and welcomed privacy experts from across the country for the two-day celebration that marked the 25th anniversary of the journal, as well as the 30th anniversary of the Center for Information Technology & Privacy Law. The Braun Lecture culminated with the dedication of the Arthur J. Goldberg Memorial Courtroom.

This year, the law school will host the 33rd annual International Moot Court Competition in Information Technology & Privacy Law welcoming students from the United States and around the world. Sorkin has served as the competition advisor for more than 15 years, and has helped write many of the competition problems.

He also has spent a tremendous amount of time on committee work that has led to benefits for the law school, its students, his fellow faculty and staff.

Finkle was honored  for his outstanding work in the classroom, and his efforts to give students hands-on experience through his direction of John Marshall’s Post-Conviction and Innocence Claims Clinic.

Finkle shares with John Marshall students his 30 years of experience with the Cook County Public Defender’s Office representing indigent defendants. Today he serves as director of the Legal Resources Division.

Finkle first joined the adjunct faculty as a legal writing professor in 1997. He agreed to expand his role to include teaching appellate advocacy, and then helped organize the clinic as part of the externship program for the Center for Trial Advocacy and Dispute Resolution. Finkle teaches the classroom portion and then has students partner with assistant public defenders on post-conviction work for defendants who raise issues challenging the reliability of their convictions and/or sentences. Students communicate with clients, work out in the field investigating witnesses, examine files, past transcripts and records, conduct legal research, attend court and may visit defendants in Illinois prisons.