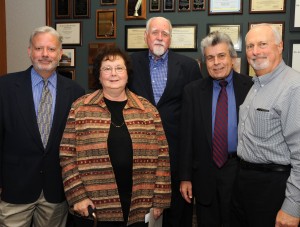 Colleagues who have worked with Diane Stary for many years were on hand to wish her the best, including (from left) Associate Dean William Powers, Professor Emeritus and former dean Robert Gilbert Johnston; Associate Dean Ralph Ruebner, and Professor Gerald Berendt.

After 46 years, Diane Stary said her goodbyes to staff and faculty at a retirement party Oct. 28.

Diane came to John Marshall in 1967 through an employment agency. No one ever officially “hired” her but she said that’s the way it was back then. She stayed “because I found out I liked administrative work.”

Diane leaves a school and its inner workings much different than when she first stepped through its – at the time, non-revolving – door.

When she started nearly five decades ago, John Marshall was only the 315 S. Plymouth Ct. building, with an annex building at 321 S. Plymouth Ct., which today is the location of the Chicago Bar Association Building. It was the year air conditioning was installed, and there was no need for security guards.

For the majority of her career at John Marshall, Diane was a staff member in the Admission Office. She did a stint as a faculty secretary in an office that was above the library, then housed on the 6th floor. 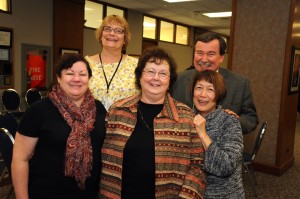 She recalled the school didn’t have a catalog, just a small flyer with a green cover, and students paid tuition monthly. She served as the official tuition bookkeeper. All files were paper, and if you needed a copy, you typed it with carbon paper. Letters were sent individually to the more than 2,500 applicants.

“I will miss a lot of nice people that I have worked with over the years (especially my good friend, Olga Scott),” Diane said in an email to the John Marshall community. “Thank you, everyone, for your good wishes. So for now good bye and thank you for the ride.” 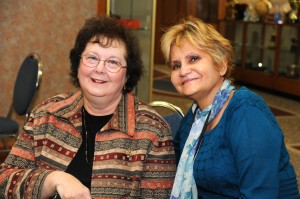 Diane Stary (left) and Olga Scott worked together for 40 years in the Admission Office.