John Marshall hosted a lecture featuring the Minister of Culture of the Czech Republic, Daniel Herman on November 21, 2014. The lecture — hosted in cooperation with The Consulate General of the Czech Republic Chicago and the Bohemian Lawyers Association — commemorated the 25th anniversary of the Velvet Revolution. The Velvet Revolution began as a peaceful student demonstration in Czechoslovakia that 10 days later led to the end of communism in that country. 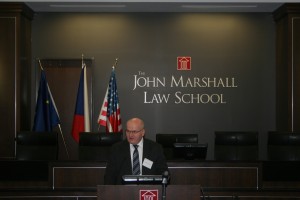 Herman spoke on how democracy has handled the crimes committed under totalitarianism in the Czech Republic.