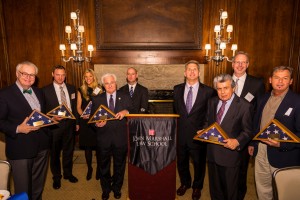 Flags flown over Baghram Air Base, Afghanistan were brought back to the U.S. by David Weiss (fifth from left) after his tour with the Coast Guard. Presentations were made to (from left) Dean John Corkery, Aaron Koonce, Melissa Soso, Leonard Amari, Brian Clauss, Associate Dean Ralph Ruebner, Chad Harrell and Jay Quinn.

“There’s so much left for us to do,” said Weiss, a U.S. Coast Guard Reserves Chief Petty Officer. “We now have an opportunity to work toward that.”

That opportunity comes in the grand opening of the Veterans Legal Support Center & Clinic (VLSC) at The John Marshall Law School.

With the quick snips of a ribbon, the VLSC marked the official opening of its new facility, where students get hands-on experience and veterans get assistance on legal issues.
Among the dignitaries on hand to cut the ribbon was Erica Borggren, director of the Illinois Department of Veterans’ Affairs, who told clinic supporters that veterans service officers she works with seeking legal assistance say “how important it is to them that they have a place like John Marshall.”

And, she said, it’s especially noteworthy that the clinic was founded by three John Marshall students who persisted in pushing their idea to support veterans.

Also present was Chicago Alderman Bob Fioretti who read a resolution from the City of Chicago, honoring John Marshall for its work.

The resolution praises “this remarkable undertaking by this iconic legal institution,” calling the VLSC “a model program for other law schools seeking to start similar programs for returning veterans in their communities.”

“This reminds us of the important work we do and can do,” said Dean John E. Corkery, highlighting the experience students get from working in the veterans clinic and others at John Marshall. “We are proud to be Chicago’s practice-ready law school.”

Supporters cut the ribbon during the opening of the Veterans Legal Support Center & Clinic on Sept. 26, 2013. The new 5,300-square-foot space is on the first floor of the 19 W. Jackson Blvd. building.

Later, clinic students presented encased American flags flown over military posts in Afghanistan to John Marshall officials, as well as the architects at Griskelis Young Harrell who created the innovative clinic space sensitive to those suffering from service injuries. From the color of paint on its walls to the open feel of its work areas, the space was designed with special focus on the needs of veterans living with PTSD.

Weiss recently brought the flags home for John Marshall after his deployment.

The clinic opened at John Marshall in 2007 when it was among the first in the United States aimed at assisting veterans. With its new 5,300-square-foot space, VLSC becomes the largest such facility in the country.

Since its inception, more than 100 students have worked at least two days per week at the clinic, fielding more than 1,000 calls for assistance a year.