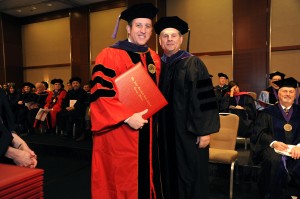 While most first year law students worry about studying for an upcoming Torts exam, or drafting their first legal memo, Michael Hastings added another task to his to-do list: running for office. Hastings, who recently graduated from The John Marshall Law School in Chicago, was elected state senator for Illinois’ 19th District while enrolled in law school.

“I have wanted to go to law school ever since high school,” Hastings said. “My American Government teacher told us to sit down, write a resume, and include what you want to do and I wrote ‘attorney.’” Hastings recognized from an early age that all of the lawyers he knew were well educated and he admired that about them.

Hastings earned his bachelor’s degree from The United States Military Academy at West Point where he played offensive lineman for the Army football team and later coached. “Going from suburbia Illinois to West Point was a major growing up experience,” Hastings said.

Students at West Point automatically incur a five-year active duty service obligation during their junior year.  Hastings considers himself lucky that West Point asked him to teach physical education to freshmen right after graduation. And then, on July 4, 2006, came another assignment altogether: Iraq.

“I look back now at pictures from that time and remember why I am doing what I am doing,” he said.

Once Hastings finished his service obligation, he started a job with Johnson & Johnson. A few months later he went on to attend the University of Illinois at Urbana-Champaign, where he received his MBA.  In 2011 Hastings stopped working and decided to run as a senator in the Illinois General Assembly, the same year he started at John Marshall.

“I went to law school because having a law degree gives me another tool in my tool kit to make me a better leader,” said Hastings. “When writing a law, every little thing matters. Being a lawyer gives you a strategic advantage in Springfield because a lot of lawmakers are not practitioners and might not understand how the effects of laws actually happen.”

“People from all walks of life serve in the legislature and bring a real world perspective,” he said. “But lawyers bring an extra tool to the table and look at whether a law is reasonable and functional.”

While studying at John Marshall, Hastings made time to participate in internships and externships. At the Cook State’s Attorney’s Office, in the Civil Law Division, he worked on complaints filed under the Shakman decree, which typically involve people awarding jobs for political favors.

“The proximity to opportunities in the judicial system is bar none,” Hastings said. “You look at the powerhouses here in Chicago, and where they graduated from, many of them are from John Marshall. I believe that regular people who are going to lead the state of Illinois go to John Marshall, and that is why I came here.”

“One thing about John Marshall is they are so accommodating,” Hastings said. “They offer courses online, night classes, summer sessions, and the staff, in general, is just so flexible,” he said. “It was tough for me, at times, because I would have to go to Springfield, sometimes for weeks at a time, but I always felt like the people at John Marshall really wanted me to succeed, and I appreciated that.”

Hastings’s routine now is preparing for the bar exam, and his Senate duties which take him to Springfield for the ongoing session.