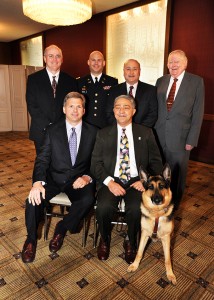 Approximately 400 guests gave a standing ovation to Urban Miyares, a blinded Vietnam veteran, after he spoke about the will to live and never give up despite the adversities one faces.

This year’s event on May 10, 2013, focused on those who are veterans, who work with veterans or support veterans in some way.  Each Distinguished Service Award recipient was honored for their work as a member of the military, the work done on behalf of veterans or support for veterans:

“Just as the law school is making great strides to support our veterans through the work of the Veterans Legal Support Center and Clinic, we decided we would give our recognition to those who serve or have served, or who are giving of themselves to assist veterans,” said luncheon Chairperson Judge Regina Scannicchio of the Circuit Court of Cook County.

During his speech, Miyares stressed to luncheon attendees the importance of helping others. Miyares returned from combat in blinded and suffering from post-traumatic stress disorder, among other ailments.

“Chronic pain is always with me, and chronic night flashbacks always come, but I’ve used that to my dedication in helping vets.” Miyares said. “I could be a multimillionaire, but I’ve got more today for helping those who sacrificed their lives in service. It’s truly rewarding.”

Accepting the award, Miyares expressed his joy for being recognized for his true passion. He added, to students in attendance, “Try to continue your promise to help vets, and you’ll get so much more in return.”