As published by Yahoo Finance 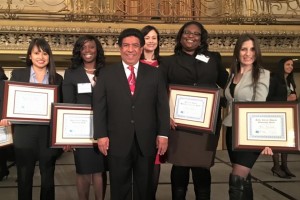 Several students and alumni from The John Marshall Law School in Chicago were honored at the 2015 Unity Dinner, which recognizes the tireless efforts of individuals who have made significant contributions to the legal community.

The Unity Dinner, now in its 13th year, honors those who have made significant contributions to the legal community and the community at large, including embracing diversity and the ideals diversity represents.

A series of scholarships were also awarded at the annual event to law students who have represented a dedication to diversity in the legal profession. Second-year John Marshall student Everlyne Stephens was awarded the Jerold S. Solovy Diversity Scholarship Award. This scholarship is awarded to a law student who advocates for diversity within the Illinois legal community and works to bring focus to those who do pro bono work. Stephens is ranked first in her class and is the current advocate general for John Marshall’s Black Law Students Association.

John Marshall students Jordannah Bangi, Marie Sarantakis and Stephanie Snow were awarded the Public Interest Advocate Scholarship Award. This scholarship is awarded to law students who are interested in pursuing a career in public service or students who are actively involved with a nonprofit agency that represents the needy and the underprivileged. While all three recipients work for different nonprofit agencies and bar associations, they all plan to pursue a career in public interest work after graduating law school.

John Marshall alumnus Judge Patrice Ball-Reed was named a 2015 Advocate for Diversity Honoree. Ball-Reed is an Associate Judge in the Circuit Court of Cook County. Prior to her appointment to the bench, she served as president of the following organizations: Black Women Lawyers of Greater Chicago, The John Marshall Law School Alumni Association, and the Women’s Bar Association of Illinois.