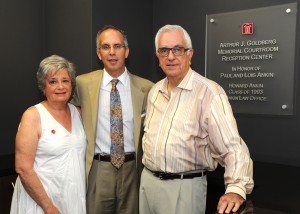 A major gift for the Arthur J. Goldberg Memorial Courtroom at The John Marshall Law School was presented by alumnus Howard Ankin in honor of his parents, Paul and Lois Ankin.

The Howard Ankin Reception Center was unveiled in a ceremony on July 17, 2013, to the surprise of his parents. Ankin, a 1993 graduate of John Marshall, is the principal at Ankin Law Office LLC where he works alongside his father.

“Your generous gift to the law school is a tremendous vote of confidence that recognizes the many excellent things that we accomplish at The John Marshall Law School,” said Associate Dean Ralph Ruebner.

He also applauded Ankin for following the Decalogue commandment to honor one’s parents.

“But you are doing more,” Ruebner said.  In the Jewish tradition, both parents and teachers have shared responsibility in the intellectual development of the child, and that to honor a teacher is an extension of honor for one’s parents.

“As you honor your parents, you recognize the value of the legal education that you received at John Marshall. In this way, you also honor the legacy of Justice Arthur Goldberg and the many teachers who have followed him at this law school,” Ruebner added.

The Goldberg Courtroom is the largest of the three courtrooms at the law school. The 100-seat capacity room on the fourth floor sweeps across the Jackson Street side of the law school’s State Street building. The judges’ bench accommodates up to seven justices for hearings. The room has the latest technology, including projectors and screens for viewing from any vantage point in the room. The courtroom is used on a regular basis for law school classes, special events and mock trials.

Goldberg, a Chicago native, was a faculty member at John Marshall while he was building his law practice and his reputation as a fierce supporter of the labor movement’s rights to organize and bargain collectively.